One of our goals here at Studio Gattai is to eventually develop our own original animated series. Because we love both computer animation and 2D animation we have been trying to figure out the best way to use the strength of CG with the style of 2D. In the past, cell shading has always been disappointing, so I wanted to avoid that look at all costs. So the question remained...how do we combine both styles?

I recently re-discovered my college thesis animation called "Densetsu no Kurotsuki"(Legend of the Black Moon). At the time I was trying to create an Anime intro using CG animation despite having pretty much no practical CG or animation knowledge. (I'm ambitious, what can I say...) Watching my old thesis inspired me to use the characters as an experiment to test our new animation ideas.

I used the classic anime run cycle from my favorite "Naruto" intro as animation reference: 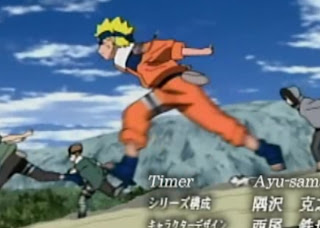 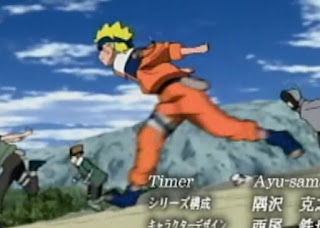 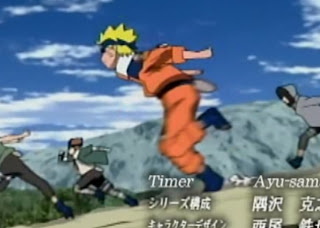 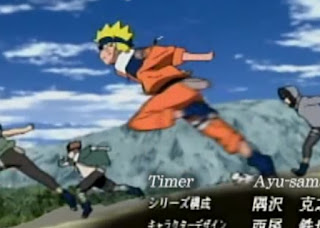 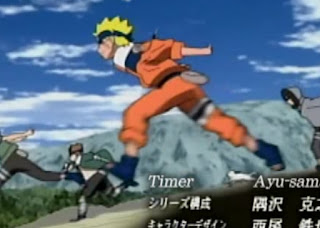 Then, I re-designed and re-created my character in CG and animated him to match the cycle's poses:


From there, I brought the animation into a 2D animation program called TVpaint and traced my CG character to create the animation you saw at the
top of this post.

This run turned out to be a perfect way to test both this "Draw-over" method of animation and a new way of rigging that I had devised. For you fellow CG nerds, there is no IK in this rig and the only FK is on the fingers and jaw. I had originally imagined this rig when I finished reading "The Animators Survival Kit" a few years ago.

Look forward to a completed clip of this run cycle animation as well as an extra surprise animated clip!!

We arrived in Kyoto by shinkansen and eventually made our way to what looked like an old town with traditional architecture. This is Higashiyama district. It's a very charming area with lots of shops and restaurants that celebrate the flavors and styles of traditional Japan: 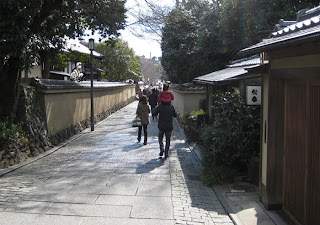 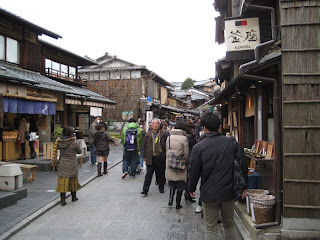 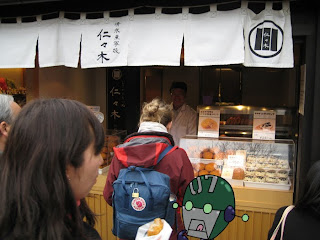 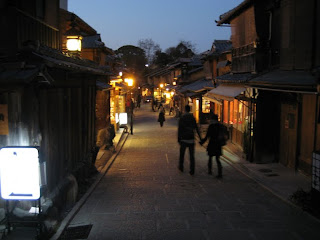 Working our way through Higashiyama's shops and narrow streets, we found our way to an impressive temple called, Kiyomizudera: 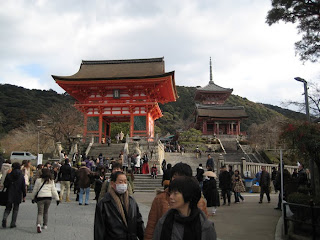 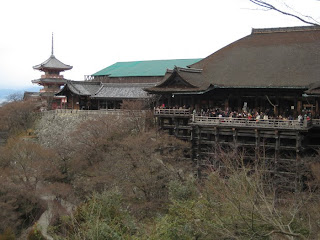 The temple has a huge wooden terrace and an amazing view.

Our next mission was to infiltrate Nijo Castle. This castle was the residence of the shogun, Tokugawa Ieyasu, and was built in 1603. It is maintained carefully with lots of beautiful carved wooden room dividers and painted screens inside. Unfortunately, we weren't able to take pictures or even sketch in the interior of the castle, but one of the most interesting features for me was the "nightingale floor," floors that squeak when you walk on them. You have to be a pretty skilled ninja to walk around the inside of this castle without making a noise! The exterior is pretty too: 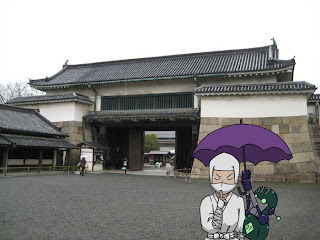 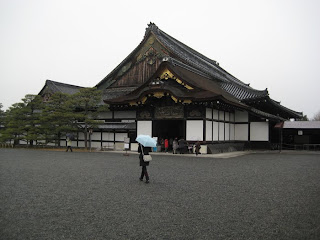 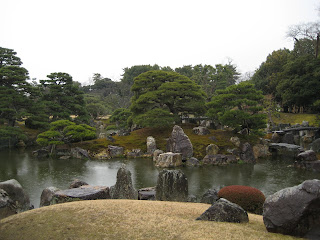 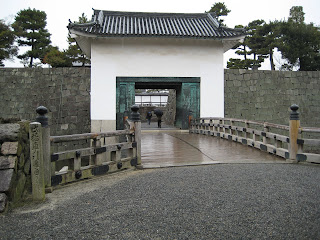 After completing our mission in Kyoto, it was time to move on to Hakone, an area famous for hot springs! To be continued...

Other Adventures in Japan :
Part 1

Yesterday we went to another fun figure drawing session. This time the theme was "High School Pep Rally," and the models included a band leader, a jock, and a cheerleader. We took another member of the Studio Gattai team with us, Josshern. It was his first time doing figure drawing! Check out our sketches: 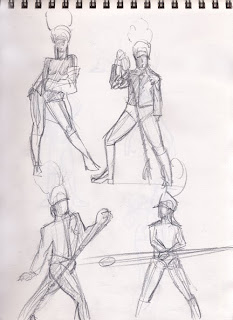 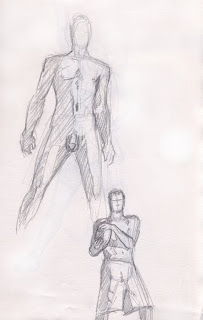 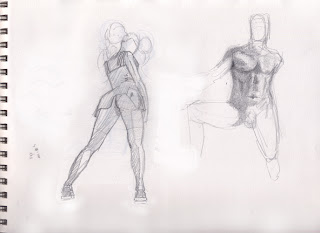 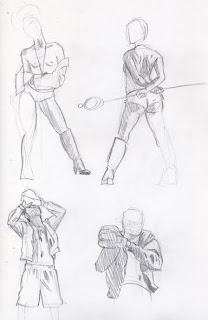 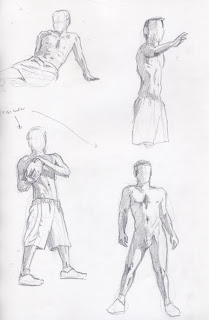 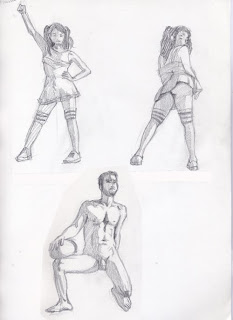 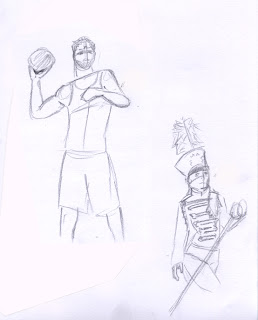 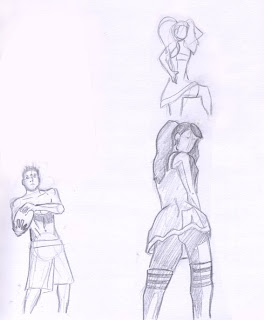 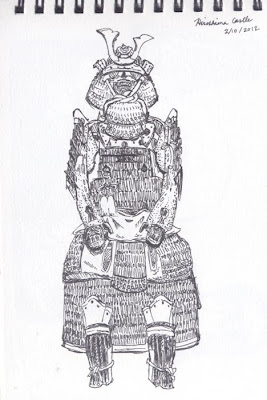 Our adventure continues as Zer07 and I got on a plane to Hiroshima. Our first visit was to the Peace Memorial Museum located in Hiroshima's Peace Park. I recommend everyone who visits Japan to check out this museum. It chronicles the progression of events leading up to WWII and the fateful dropping of the atomic bomb. There are firsthand accounts of what it was like for the many victims of the blast, and models of the city show the shocking before and after images.

Outside the museum, There is a beautiful statue of Sasaki Sadako, one of the atomic bomb's younger victims. Sasaki Sadako was two years old when the bomb dropped. She survived and went on to be a strong and healthy young girl, but at the age of 11, she developed leukemia as a result of radiation exposure. Her best friend encouraged her to fold 1000 paper origamai cranes, which would allow her to make a wish to the gods to be cured. (In Japanese mythology, the crane is said to live 1000 years.) Sadako wasn't able to complete all of the 1000 origami cranes, so her classmates folded the rest for her after her death. Today, the statue of Sasaki Sadako is a tribute to her life and stands as a wish for peace. 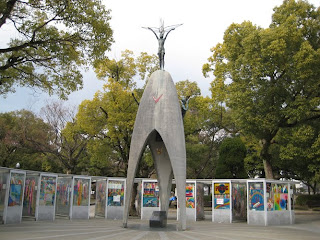 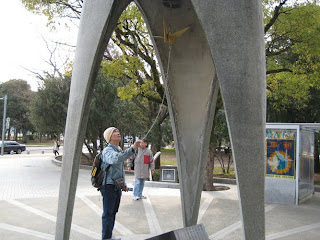 (A man rings a bell for peace.) 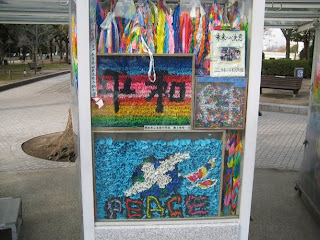 (People from all around the world send paper cranes to Sadako's statue.)

Walking away from the Peace Park, you can see the A-Bomb Dome, a building that was just feet from the hypocenter of the blast and one of the only structures to barely survive. It has been maintained in its exact condition to show the atomic bomb's devastation. 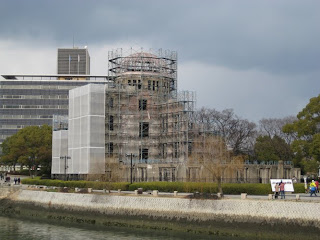 As we continued to explore Hiroshima, we stumbled upon a cool looking castle! This is Hiroshima castle. 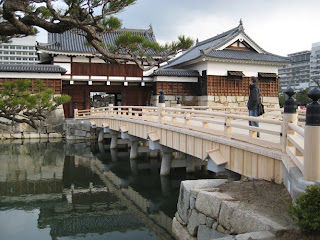 (Moat outside of castle.) 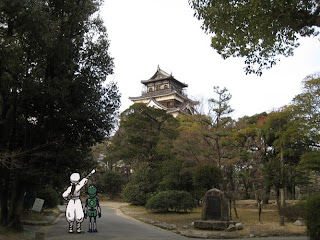 This castle was actually destroyed during the bomb, but was rebuilt to completely resemble its original. Inside, the castle is now a modern looking museum, with many artifacts from feudal Japan like samurai armor and weapons. No photography was allowed inside, so I tried to sketch a picture of some cool samurai armor.

Our adventure continues as Zer07 and I ride the shinkansen (bullet train) to Kyoto...

Other Adventures in Japan :
Part 1

We love cartoons, whether it's Western animation, Japanese anime, manga, CG, or 2D. We aim to "gattai" all the best components of what we love about cartoons and make something really kick-ass.